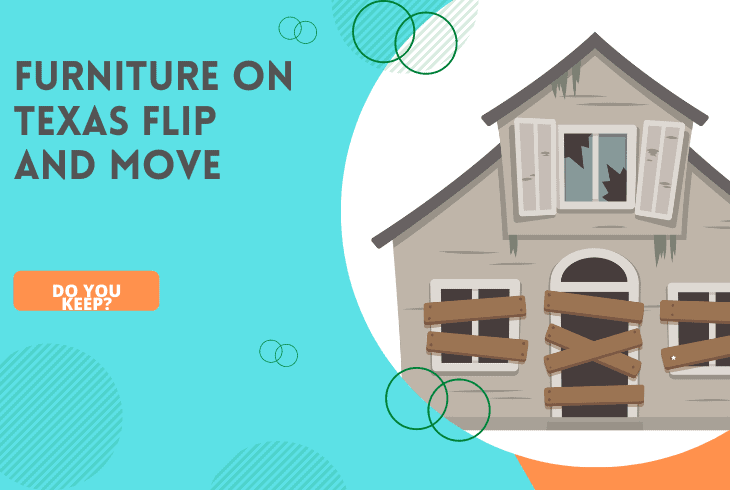 Do buyers keep the furniture on Texas Flip and Move? For fans of the show, this is one of the most significant inquiries that viewers have!

There is a lot of speculation concerning home renovation shows where they flip rundown homes, fix them up, and sell them for profit.

This show’s premise is quite interesting, as it is a little different than many of the other shows on HGTV.

After all that hard work, the before and after pictures are astounding, but do buyers get to relish in it, or is it just for show?

Keep reading to learn more about Texas Flip and Move and how the process of renovating and keeping the furniture works.

The buyers typically do not get to keep the furniture, but depending on the client, there may be some pieces included with purchasing the house, or a standout piece might be gifted to the homeowners.

What’s the Premise of the Show?

The show brings you multiple teams of professional home renovators that compete with one another to purchase homes that they’d like to flip for a profit.

READ NEXT:  What Can Be Saved from Smoke Damage?

The audience watches the participants buy derelict frame houses that are on the brink of getting condemned.

This show is different from many others because the renovators are only purchasing the house instead of the land it sits on. They only get to see the outside of the home when they initially make the purchase.

Once one of the teams wins the bidding war for the house, they move it to an auction lot where they film the show in New Fairview, Texas.

Is the Show Staged?

This question is where you get into whether or not buyers get to keep the furniture.

READ NEXT:  Can You Buy Furniture From A Staging Company? Facts You Must Know!

It is widely known that renovation shows that stage the home is only doing so for the final reveal, but the new homeowners won’t get to keep the furniture.

It’s a bit different when it comes to Texas Flip and Move. Toni Snow, one of the leading personalities on the show, has repeatedly stated that they do not follow a script and are 100 percent themselves at all times.

She contends that they are all knowledgeable and not just playing the role.

However, as it relates to the homes, it would be nearly impossible to renovate an entire home after having it moved in such a short amount of time.

Also, there are situations in real life where you need approval from a third party in order to complete the purchase.

Given everything that goes into flipping a home, building codes, getting estimates, actual completion of the work, and so on, it wouldn’t be possible to complete so many episodes per year if it weren’t at least partially staged.

READ NEXT:  Is A Loft Considered A Bedroom? Definitive Answer!

What Do the Representatives From HGTV Say?

Betsy Ayala is the Senior Vice President of Production and Development for HGTV, and she says that nearly every renovation show on their network is staged.

She mentions that this is the only way for us to view new episodes of our favorite house renovation shows each day.

Though she didn’t speak specifically about the show Texas Flip and Move, she stated that there is some room to keep the furniture depending on the scale and types of completed projects.

Do Buyers Keep the Furniture on Texas Flip and Move: What Happens After the Show

Based on the pattern that other home renovation shows from the network follow, the furniture gets purchased by the homeowner or returned to the furniture company at the conclusion of the show.

READ NEXT:  Pest Problems: What Kills Scabies on Furniture?

Here’s how it works:

The renovators will pick certain furniture and decor pieces from a local furniture company, and rent them for short-term use in order to set the house up for the new owners.

Once they show the house, the couple or individual has to agree to purchase those items, or they get returned to the store.

That includes couches, clocks, centerpieces, chairs, everything in the house can get removed. In some cases, the new owners may want to keep all of their own furniture from the previous home.

In other instances, the owners keep their furniture and the network also gives them one or two standout pieces such as a sectional or a table, etc. However, this is not a guarantee from show to show.

Pros and Cons of Keeping the Furniture

Here are the most commonly asked questions regarding the furniture on Texas Flip and Move:

READ NEXT:  Can Air Mattresses Be Used Every day? Facts You Need to Know!

1. Is The Furniture Expensive On Texas Flip And Move?

The furniture on the show is costly, as each team is trying to make the house look as nice as possible to entice the buyer to make the deal and win the comp by earning the highest profit.

Usually, a design artist makes those decisions, and they tend to pick a combination of budget and exquisite pieces.

2. Can You Trust House Flipping Shows?

You can trust them to entertain you! They aren’t going to show you every aspect of buying and flipping a home, all the expenses included.

However, you still get to see a fantastic transformation that eventually occurs, just not in the timeframe you’re told.

READ NEXT:  How To Date Waterfall Furniture - The Most Effective Way

3. Does HGTV Let Any Homeowners Keep The Furniture?

So, on Texas Flip and Move, do the buyers get to keep the furniture?

Probably not, but according to the Senior VP of productions, there is a slight chance that a few of their clients might require them to keep the items inside the house.

Read Next: How to Remove Roaches from a Couch?

Due to the nature of the show and the fact that it’s unrealistic that the teams renovating these homes could have them completed so quickly, it’s safer to say that the buyers wouldn’t get to keep the furniture, at least not initially.

Because this show is so much different from the other flipping shows, it’s not exactly clear what all of the inner workings are.

READ NEXT:  How Long Can You Keep Furniture in Storage? Facts You Must Know!

So, do buyers keep the furniture on Texas Flip and Move? We’re going to say no for the moment until one of the show’s stars decides to divulge a little more information to us. We all had this question before – does Roomba clean under furniture? Can it reach the far ends of your couch without you crouching down? Would it be able to clean places that your vacuum cleaners find hard to reach? In this guide, I’ll be going around the topic of discussing whether your robot sweeper… “Can I use my Bissell carpet cleaner on tile floors?” I’m sure you’re here because you’re seeking to answer this question. The use of carpet cleaner is a better way to get rid of those stubborn stains that would never want to leave your carpet. Now, the big question is; If the answer to this… Not many people know what to spray on furniture for lice removal, and I didn’t know about it before either! I became so frustrated because I had to vacuum my sofa twice a day! So, I tried finding a comprehensive solution for it, and I’m glad I did. In this guide, I will give you…